I started off as a hard core lover of harry potter series, my relationship with Rowling series began with the first book of course way back in my school days, I got to read the first book in my 7th grade...Though I was out of the fantasy tale somehow the magic caught up with me and  I was completely addicted to it..Harry and his entire enchanted world was something that I always wanted to live in..Don't you all as kids wished a dash of magic everywhere around us be it in the name getting rid of usual homework  or a  quick

spell so mom would forget to feed you with a glass of milk (i hated milk), time travel machine to get you to endless holidays and the list is endless.. Harry potter had it all.. Its just not about the magic but there is a deep message of friendship and trust and celebration  of  the whole spirit of childhood with the right mix of intellect and brilliance through Hermione, funtime with Ron, mischeivous brilliance of Fred and George, above all Harry Potter who kept all together through thick and thin..

Bottomline of  the novel is a battle of good vs evil that progresses through years in Hogwarts school of  witchcraft and wizadry...It all starts when Harry on his eleventh birthday discovers that he is a wizard though the letter of of acceptance from the school personally delivered by Gigantic Hagrid with a pack of birthday cake. Brought up in the household of Aunt Petunia with no love and care , he is pleasantly surprised with the revelation, and deeply happy for the change. At Hogwarts he is introduced to the world of magic filled with witches and wizardry he is  pleased with the world that becomes his life  and learns more about his parents , he also discovers that he is a natural at Quidditch that he has inherited from his father and above all he learns about Lord Voldemort whose mere name everybody is scared  and it is he who has left a scar on his forehead killing  his parents, who died trying to save him..Harry finds friendship through Ron and Hermione who stick with him till the end..He slowly finds love, friendship (which is the important theme of the story), the book 'HP and the Sorcerer's Stone' starts with the trio saving the philosopher's stone from professor Quirell's who in turn is trying to help Lord Voldemort's back to life..The mere touch of Harry burn Quirell..

Second book 'HP and the Chambers of Secret'  they save Ron's sister Ginny (who reads a chapter from a diary that opens a gate for a monster from 'The chamber of secrets' in Hogwarts )..Harry also happens to destroy one of Voldemort's soul (horcrux) and killing the monster in the chamber.

Following is the next book 'HP and the prisoner of Azkaban' ...In the third year of Hogwarts, Harry and his friends come across Remus Lupin one of the wonderful defense against dark arts teacher, apparently Lupin also happens to be one Harry's parents closest friends, this is the year where we are introduced to Rowling's dreadful creatures called the Dementors who guard the prison where the wizardry criminals are held captive , these Dementors can suck the happiness and any trace of peace from human upon close contact..Harry  finds about about his godfather Sirius Black who has been alleged for betraying his parents, the trio with the help of time travelling machine help Black escape from Azkaban , fight against Dementors yet again proving that Harry is indeed destined for greatness..

After the third book, I found my interest in Harry dwindling ..Though the first four books were released in my school days, I got to read Goblet of fire only in my college days..

In the fourth book 'HP and the Goblet of fire' and the fourth year of Hogwarts,  Hogwarts is hosting a Tri-wazard contest which is like an inter school competition  is open only to the senior students .In this, we get to see many witches, professors from other magic schools as well, of course what fun without Harry into the contest but then he is not eligible to enter still someone make sure that he enters and gets to the final stage of the competition.. The tournament cup is a portkey( transportation object for wizard that transports them to predetermined upon touch)  he and Cedric Diggory (fellow contestant) are transported to cemetery and come face to face with Voldemort..Voldemort takes Harry's blood and restores his life, in close seconds Cedric dies but Harry survives..All this happens through one of Voldemort's supporter who impersonates as Professor Moody ..

Fifth book 'HP and the Order of Phoenix' witnesses a lot of activities as the Ministry of Magic intervenes on the school's activities, Prof Dolores Umbridge takes on the charge as the defense against dark arts teacher and becomes the high inquisitor of the school, outraged by the syllabus Harry with his friends start 'Dumbledore's army', Harry learns about Order of Phoenix a secret society that is set up by witch working hard to keep the world of magic away from Voldemort..Harry is taught Occlumency , a magical defense of mind from external mind reading and control from Prof Snape and he is having trouble concentrating.. Harry again with his friends fight against Voldemort's supports in the Ministry of Magic who are trying to get their hands of the glass sphere of prophecy..There is a strong fight against the teenagers and the dark witches in the dual the order of phoenix join them and during the fight Sirius Black is killed ..The prophecy state that Harry has a superior power that Voldemort doesn't possess and that either Harry destroy Voldemort or be killed by him..This year he also learns why Harry has to return to Privet Drive to his Aunt Petunia for every miserable summer holidays..

Fifth Book 'HP and the Half-blood Prince' Harry gets his hands on a book signed by an enigmatic half blood prince filled with many annotations, potions and many entries.. This is this book we see many social activities ..Harry's attraction for  Cho fades and he starts dating Ginny while Ron and Hermione's love also blossoms.. Harry learns from Dumbledore  that Voldemort's soul is split into many Horcruxe which has been hidden in many places..Together they start  the search of them travelling through Voldemort's past life..Harry has to find and destroy them to completely kill Voldemort...Professor Snape finally attains the post of being the defense against dark arts teacher , at the end of the book we see Snape killing Professor Dumbledore, the reason is revealed only upon the the death of professor Snape...

In the final and the seventh book, 'HP and the Deathly Hallows',  the battle in open, Voldemort regains power and takes over The Ministry of Magic, Harry and his friends drop out of Hogwarts in the quest  for Horcruxe .. Harry unravel the complicated personality of Professor Snape and the past of Prof Dumbledore.. Harry masters occlumency.. Harry learns through Snape's  memory that Harry happens to be one of the horcruxes hence lets himself be striked by Voldemort making Voldemort belive that he has finally killed Harry.. As all the horcruxes are destroyed in the final battle, tit finally comes down to Harry vs Voldemort and to the prophecy that "Neither can live while the other survives". The battle is deadly and we see lot of blood shed and deaths, Elder wand recognizes Harry as its true masters and refuses to kill Harry rebounding ..The same killing curse kills Voldemort who tried to kill Harry years ago bringing an end to the finale of the Harry Potter series..


As always with  famous series, Harry Potter too has been adapted to movie,  I  have  problem with a movie adapted from book as they lack details..Though I enjoyed the first two to some extend from the third onards I could not enjoy..

The book is the torch bearer of loyalty, bravery, courage under pressure, above all the zeal to believe in oneself. It underlines the point that in the fight between the good vs evil ,at the end its all about the good and not the evil..We witness many death, few are heart wrenching starting the list starts with Sirius Black, Albus Dumbledore, Dobby, Hedwig, Moody, Lupin, Tonk, one of the twin brothers Fred Weasely..

Being said that to me the most complicated characters was that of Severus Snape. His detestation to harry right from the beginning of the series is only mutual ,this worsens through the consecutive series... Though he is bitter and cold to everything around him, he is brilliant in what he does, working as a teacher for potion, his eyes are always onto the post of defense against dark arts still he is a real master at potions too. His true character and  true loyalty is known only after this death through his memories..

And my favourite character is that of Hermione she is smart, annoyingly brilliant with know it all air, quick witted and a true friend when in need.. 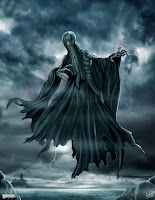 I liked the Rowling's fictional spells, and few words such as pensive (a storage gadget for memories), parsel tongue (language to communicate with snakes), Floo powder(powder that wizard use for travelling) there are many more that were quite interesting ..The magic world itself  is under the control of Ministry of magic with various departments under it, there are magical enforcement squad, a specially trained witches to keep the criminals on check, event courts and Prison of Azkaban to keep the crime under check..They live under strict rule that the world of wizard should  remain unseen to humans( muggles) at all cost..At the household of a witch, there are house elves (small creature that works as servant at wizard house with at most loyalty undergoing deep neglect) who help out with everyday activity..The world with Hogsmede(magical village) Quidditch  matches made the series a thing of wonder often adding feathers to my thoughts and imagination..We watch the shy kids' amazing transformation into matured, daredevil kind of people in league of legends fighting  against evil, with their own fear and doubt yet overcoming them all..