A case of exploding mangoes by Mohammed Hanif

Buy A case of exploding mangoes from Flipkart.com

Summary
General Zia ul-Haq the military dictator of Pakistan is killed in a plane crash..Now who is responsible for this? There are many serious doubts., the army generals growing old awaiting promotions.,The CIA., The ISI, RAW.,There are some quirky reasons too such as mechanical failure, A blind woman's (Zainab) curse, Overripe mangoes(can you figure out that) and of course Ali Shighri fictitious character and  the hero of the novel The what and who of the assassination is seen from a completely different angle..

Review
Its a bitter comedy of Ali Sighri Junior under officer in Air force who seeks out revenge for his father's suicide...The story moves around through the eyes of not just the protagonist Ali Sighri but from General Akhtar, the second in command., Major Kiyani,street sweeper Ali's cell mate,and the  general himself..The serious plot is handled with blithe lending to the actual event of General Zia ul-Haq's assassination..At times cynical at times serious at times darkly humorous ..It's a far cry from the other books that we come across all the time..Language is simple and the story with some Pakistani history easily follows..He is clever writer who superimposes the fictional story line with that of the assassination...

General Zia overthrows the elected government of Zulfikar Ali Bhutto subsequently executing him. General Zia was an attrocious dictator whose law included the convicted women (even a rape victim) to death...There are interesting space like the American embassy in Pakistan US ambassador for Pakistan's home, the life in armed forces of Pakistan..The story also revolves from the angle of the First lady's her stand on being The First lady of an Islamic country..General Zia leads a total complicated life where at one end he is THE MAN of the country with many cronies around him at the same time he is a kind of man who sheds violent tears during his morning prayer and all have learned to ignore him at the same time wondering the reasons behind it ., intensity of his devotion, the matter of state, or tongue lashing from the first lady to name it a few...He trusts none around him., leading a life of fear..He never left his house to the presidential house for the same fear...He eventually requests for red level security....Man who took control over the country by force was fearing the lose of it...

Through Shigri we are introduced into the illogical Pakistan;s daunting dictatorship its ongoing political bustle..In a party at the US embassy, Bin Laden is an invitee..Ali Sighri gets into trouble when his close buddy sneaks a small plane which he misses to report as he if found missing during the regular roll call..He is locked up in a prison with other political prisoners...My eyebrow raised through the muslim law on a rape trial, condition one the victim has to be testified as a virgin, condition two four men should allegedly be involved in it, condition three , the victim should be in a position to identify all of them., above all four men should hold witness pressing for her virtuousness...

All in all Hanif's writing is penetrating and I found the read  fast paced..This book may not be everyone's cup of tea.,grab your copy if you can stand dry humour, I enjoyed reading it though I would not recommend to everyone ..I liked it yet didn't love it... 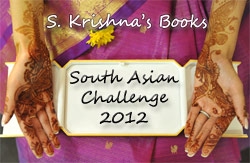