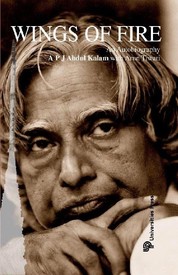 Summary
Memoir of  APJ kalam....From his  modest hometown becoming the missile man of the country.....The book is a complete inspiration to anyone who reads....

Review
To start with this book wasn't a recent read...Currently I am reading Turning points by APJ and I was reminded of this book ., and so here I go...Like every Indian APJ as he is known is a role model to me..For anyone who is not an Indian or an Indian who is not brought up in India may not be able to identify with him...Becoming a scientist expanding his horizon in Indian space research organization (ISRO) with failures then onto successful launches placing India into world's most sauted country in launching satellites to designing them for various indegenous purposes helping India wide and far is so modestly described that you are in awe for this great man..The reader is set on a nostalgic journey starting from his fond recollection of his hometown, his teachers, who inspired him took me back in time into my own school days (though my school was much more sophisticated my teachers were all darlings)...There are photos in black and white to make it even more heart felt..From senior scientific assistant at the Aeronautical Development Establishment., desgnining Nandi(hovercraft) to become rocket engineer at Indian space research organisation rubbing shoulder with great thinkers of India like Prof. Vikram Sarabhai (then Chairman of ISRO), Prof Sathish Dhawan etc...His research  mishaps are added as a lesson to the readers are enlightening..Details of satellites to launching them in the orbit with its basics on their functions can't be better described than this.. Time and again APJ expresses his love for teachings , reading all about missile engineering I knew what it was like enlightening a lay man about it...This book highlights APJ's life till 1992, from then on its covered in the book Turning points.The role of a team leader is amazingly portrayed through his own example., which can be picked up by anyone invaried of the field of interests ., for instance., when things fail take the blame on yourself  (leader) and when something is successful put the credit on the team...APJ popularly known as the missile man of India didn't have a grandeur start but a meek beginning from the coast of Rameshwaram..Unlike many icons of India, he had no education abroad still became instrumental in driving India to the forefront in terms of rocket engineering inspiring a country to work together, now don't get me wrong as I have nothing against people educated abroad but my point through APJ's life he showed it to the country that its not the education abroad that matters but how good one can extract the knowledge and apply with motivation towards the goal...The language of the memoir is simple with no jargons, narration is elegant...If this man from the southern coast of India can make this big living on his own terms with high principles with no compromises., why can't anybody for that matter be what one wants to be...When the going tough , the tough gets the going..and if you can then no matter what none can stop you from achieving the goal, inspite the odds..Dare to dream is the take home message of this book...
Posted by vb at 8:30 PM