Book Review: The old man and the monkey by George Polley: Blog tour 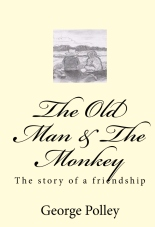 Buy The old man and the monkey from amazon.com


Summary:
Its is a story of friendship in the most unusual circumstances between a man and a monkey still it stands tall over the period of time gaining respect and acceptance among all..

Review:
Genjiro Yamanda is peacefully wading through his retired life with his wife Harue in a place called "The village", it is all serene close to nature with tranquility and wonder surrounding them, their two children are independently leading their lives with occasional visit back home..Over the years Genjiro has developed a special interest over a place for his meditation by the edge of the forest...Out of blue one day he has a visitor that too a snow monkey ,giant and old just like Genjiro , from then on they strike a chord developing a special bond that none understood..He  sat with his new monkey friend whom he named Yukitaro sharing his silence just like that with his wife..Yukitaro somehow reciprocated well all enough..Initially skeptical Harue finally gave in to the friendly Yukitaro..The season pass by bringing in wonder and blessing , bond between Yukitaro and Genjiro only strengthened..Yukitaro even became regular visitor to their home bringing in gifts along from forest..This friendship went down all well till the end of their lives in all its splendour..

This is the kind of story you want to read it to the children  to bring out the greater meaning of life and relationships. Gesture of kindness, love, friendship reflects through the quiescence and calm Japanese Village...The warmth of the bond wraps the reader from the beginning till the end and I loved the way it closed just in a classical way..Read it if you love to reflect the deeper meaning that goes beyond the words...

George Polley was born in Santa Barbara, California and raised in Seattle, Washington. He has lived in California (Berkeley and Stockton), Illinois (Cooks Mills  and Villa Grove), Minnesota (Luverne, Marshal and Minneapolis), and from 1984 until early in 2008, in Seattle, when he and his wife moved to Sapporo, Japan so that she could fulfill her dream of returning to the land of her birth.

He has also authored several booklets in the mental health field, two of them co-authored with Ana Dvoredsky, M.D. in 2007.

George's e-book 'The Old Man & The Monkey' poses one of the most elegant and powerful arguments against racism of all time, and his 'Grandfather & The Raven' argues equally compellingly against violence in all its forms.

Excerpt
In a small park near one of the rivers that run through the city of Asahikawa, Hokkaido, there is a bronze statue of an old man and a monkey seated side by side on a wide flat stone looking out over the river and the mountains. The monkey is bigger than ordinary snow monkeys; the top of his head reaches to the old man’s shoulder.
Looking at the bags under his eyes, one can see that the monkey, like the man, is elderly. Affixed to the base of the statue is a bronze plaque that reads: “Genjiro and Yukitaro.” These two old friends sit and warm themselves in silence as the years and seasons pass.
As Long as long as the statue has been there, people passing by have paused, wondering how a monkey and a man could become friends because, as everyone knows, monkeys are pests and can be dangerous when humans get too close. Some people tell each other that such a friendship is unnatural, and that because it is unnatural, is impossible. Others believe that Genjiro and Yukitaro are characters that the artist made up. But everyone agrees that the statue is appealing, because the two old friends have such an air of tranquility and peace about them that people come and sit down next to it to enjoy their lunch, or to just sit quietly and look out at the river and the mountains, later commenting on how peaceful the experience was.
So it is that the old man and the monkey receive a constant stream of visitors who sit and enjoy their company in silence and take something of them away to warm themselves.
No one believes the old man and the monkey were real; but I know that they were because the old man was my grandfather, Genjiro Yamada, and Yukitaro was his companion and friend for the last five years of his life.
Now is the time for me to tell their story and reveal for the first time how an improbable friendship like that between a man and a monkey happened, how it was good, and how it ended.
Posted by vb at 6:56 PM