Summary:
In Chicago, the name Jon Elliot garners attention. When the legal mastermind offers to mentor Alexis Winters, Bingham, Elliot and Bright's newest associate, she jumps at the opportunity sure this will launch her career. But Jon has a dark side, one that demands unquestioning loyalty and a willingness to defy the spirit of the law, if not the latter..
Thrust into Jon's world and expected to play by his rulebook, Alexis grapples with her conscience.On several occasions, Jon's orders are at odds with what she learned in law school, and she finds herself trapped between her profession's ethical rules and her own values..

Review:
In spite being a A-list student in law school she somehow hates  appearing in the court room, she prefers the research and paper work, investigations related to the work.. Working with clients was another art  she loved...When her initial excitement of working under Jon Elliot the partner of  the premier law firm Elliot and Bright, she sees the darker part of being a lawyer ..AgriPro a client of the firm has a lot to hide...AgriPro is just an ally that leads to a chain of  political and power games..Trying to get to the bottom of it will only cost her life and everything she holds dear..

Alexis as a character would appeal to any reader, she is talented, intelligent, struggling to live up to to the ethical code she was brought up with in a world where ethics and integrity is written only in theory and never put in practice...Even when Alexis didn't approve of Jon's way of life she was in awe for the attorney in him...Jon was decisive and quite good at it even when he decides to go for the wrong people, for him defending or working of the clients was important not the morale side of it...A real harsh taskmaster, he wanted his rules to be followed with no questions, that left Alexis more irritated than happy to be working with him... Time and again she questions her own ethical sense while handling certain case..She quickly realizes that she is living in a world of grey and not in black and white..And she realizes as she quotes
“I still think the same way, but I’ve learned to temper my thoughts and opinions. I don’t agree with what many people do, but since most people live that way, I guess I’ve learned to live with reality. It doesn’t change how I feel inside, though. I just keep it to myself.” (p-30)

Out of blue Ryder Prescott an investigative journalist and Alexis teenage fantasy comes crashing into her life...Their relationship blossoms oh so quickly....Alexis and Ryder get together to unravel the secrets , a game and a gamble where she can trust none...Along the way we are also introduced to Alexis twin sister Allyson quite the opposite of Alexis she drops in the right moment through the plot filling in the gaps...

The book moves swift with its share of twist and turns..It goes for an easy breezy read exploring the choices of life we make for the sake of success and a comfortable life... The synopsis was quite intriguing but I must admit I was little let down as the story didn't really live up to the hype of the synopsis....Johnson has done a pretty good job in developing the character fast..Their internal struggle to live their dreams against their beliefs is something that readers would love...Yet there were moments which were completely amazing..The story sprinted away so fast that I couldn't get the hang of it many a times...Short and crisp with lost love and suspense with good storyline is what I would sum up Dilemma...


“No wonder you look dynamite.”
Alexis was thankful the darkness hid her blush. “Thank you, but I exercise because it relieves stress and helps clear my mind.”
Ryder hummed in agreement while taking her hand as they walked through a small park. “Litigating is a demanding job. Do you like it?”
“Parts of it.” A puff of wind blew hair into her face, and she turned slightly toward Ryder, using his body as a buffer. He tugged her a little closer and tightened his hold on her hand. “I love researching. It makes me feel good when I find the needle in the haystack that helps win a case. Plus I like piecing together new theories and setting new precedents. I don’t like the actual court part, though. I mean, I like creating the arguments but hate making them in front of the judge. It’s nerve-racking.” She frowned, thinking about her stomach’s gymnastics each time she set foot in a courtroom.
“What made you choose defense work?” Ryder brushed a small branch aside so it wouldn’t hit her and led her toward a stone bench set back from the walking path.
“I guess you could say it chose me. I really liked criminal law in school and I was good at it. I won several awards for my studies in that area. But when time came to apply for jobs, I just couldn’t go in that direction. I didn’t want to do criminal defense because I couldn’t handle helping people who I thought were guilty even if they were entitled to representation. Prosecuting appealed to me, but it also scared me. What if I put someone innocent away? It seemed like too much responsibility.” She looked down at her hands, uncomfortable with her own admission. It wasn’t like her to share her innermost thoughts with other people. They were supposed to remain locked deep inside her. So why was she sharing her fears with Ryder of all people? She pushed that thought aside for later analysis as she tuned back into the conversation.
“So, why employment discrimination?” Ryder wrapped an arm around her, and she snuggled closer to him, appreciating his warmth and how good he smelled. It had been quite a while since she had enjoyed a man’s company in this way.
Alexis leaned her head against his shoulder and thought about how to answer. She considered giving him the canned answer she used during interviews, but the quiet intimacy of the moment allowed her to admit the truth. “I guess because it’s similar to criminal work in many ways without the safety risk or responsibility.”
“Why defense instead of plaintiff work?”
She laughed softly. “Because they offered me a job and I get paid well. I’d love to work on the plaintiff side or do pro bono work, but I have bills to pay.”
“Still the idealist, though?” His fingers played in her hair, and she closed her eyes, relishing the sensation. “Even though you’re swimming with sharks?”
She could tell he was teasing by the tone of his voice. “I don’t work with sharks, but I suppose I have changed. How could I not?” They sat in silence for a few minutes while she contemplated how to explain. “I still think the same way, but I’ve learned to temper my thoughts and opinions. I don’t agree with what many people do, but since most people live that way, I guess I’ve learned to live with reality. It doesn’t change how I feel inside, though. I just keep it to myself.”
“It’s hard to keep the values we learned at home alive. Time after time, I’ve tried to do the right thing, to report the truth, to showcase wrongs, but more often than not, I either get slammed for it or find out no one really cares. Sometimes I wonder why I pick myself up and do it all over again.”
“But you do.” Alexis tilted her head up and stared at Ryder, the moonlight highlighting his face and betraying how seriously he took the conversation. “I admire you for it.”
“Thank you,” Ryder breathed as he lowered his mouth to hers. The first kiss was soft and gentle, nothing more than a light touch of lips saying hello. The second had considerably more heat behind it and left her breathless. He lifted her chin and stared into her eyes as if seeking permission. Alexis trembled under his heated gaze. She knew what he was asking and didn’t know if she had the strength to deny him—or the courage to survive the aftermath. Ryder was a love ’em and leave ’em type, and she was a commitment kind of girl. Could she accept the night for what it was and live in the moment?
About the author: 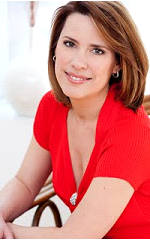 Jacquie Johnson fell in love with books on her mother’s knee. From Dr. Seuss to Carolyn Keene to L.M. Montgomery, she continued her affair until her teenage years when she began reading authors ranging from Tom Clancy to Nora Roberts to Johanna Lindsey. She’s still an avid reader but now carries an e-reader instead of a paperback in her purse. Mysteries and suspense are her favorite genres, but she enjoys romance, historical fiction, and non-fiction as well.

She graduated from Harvard and Indiana University School of Law. After ten years practicing labor and employment law, she retired to homeschool her daughters. She lives in Northwest Indiana with her husband, three daughters, and a spoiled cocker spaniel named Princess..


Disclosure:I am a member of Reading addiction blog tour , I received a review copy ..I opinion expressed are honest and I am not affiliated with any third party for the same..
Posted by vb at 8:03 PM