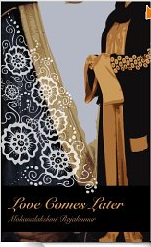 Summary
This novel introduces us to Abdulla, a man who is still recovering from the untimely death of his former wife and unborn child, as a second marriage is arranged between him and his cousin Hind. Hind is a thoroughly modern girl who does not appreciate the prospect of being anyone’s second option. So the wedding is delayed as Hind travels to the UK for study. There she meets the boisterous Sangita from India and eventually her oddly alluring brother, Ravi. The story explores not just arranged versus spontaneous love but also the love we feel for family (whether we want to or not), friends, and those we’ve lost. Transporting the reader to both Qatar and London and delving deep into Qatari culture, Love Comes Later is an excellent selection for book clubs and those with the travel bug.

Review
The title reminded me somehow about the famous song "Love will keep us alive" by Eagles...I can go on and on and on about it....Okay now about this book, I fell in love with it by page one, though my after thoughts as I went on have been mixed..Most often the initial kick or the feel always stays with me...
At first I imagined it to be of Abdullah's struggle to keep up with his lost love but hey then came in Hind showcasing a woman trying to uphold an independent Qatari lady's life  with all its restrictions..At this point I liked it even more ..To complete the circle comes Sangita..The vivacious full spirited Sangita is the complete opposite of Hind..They meet in their class and from then on their rapport makes them room mates...Sangita American with her Indian lineage has many things common to Hind..Both parents wish to settle their respective daughters by getting them married.. Their education and other things take back seat for them..Yet these girls somehow manage to keep all this aside travel to England for education..Hind escapes her home (middle east) away from the life of scarfs and refrain...While Sangita from her mother's groom hunt...Hind's sudden disappearance to India to explore her horizon followed by unexpected entry of Abdullah at Hind's residence creates a full swing of drama entwined with anticipation..Sangita and Adullah's sudden flame was a bit unfathomable.. But like they say Love has unusual circumstances and situations to lighten up..That being said what I loved later is the stand taken by Abdullah to stand by his word and feelings with full honesty in spite of the odds presenting his love  in front of his family...
Love can transform people and attitude which is wonderfully portrayed by the three main characters of the novel... Abdullah's three years mourning for his lost love Fatima and his reluctant step towards his second marriage for the sake of his family is all well crafted by Mohanalakshmi... Sangita who had numerous questions about the orthodox life of a Muslim easily slips into it when a whip love caresses her (now that is not a oxymoron)..While Hind desires to fly high beyond her family horizons and ahead of the line drawn by her family....Tale beautifully transcends from Qatar to Britain then back to Qatar with a hitch...
It is not just about love and loss but also about the variant of human emotions that sparkles through each one of us..Friendship, faith, honesty, sibling love all are beautifully done..A special mention about Luluwa who brightens bringing smiles on the readers face...
Mohanalakshmi effortlessly portrays the lives of all the cultures..Lives of the aristocratic middle east family who are wrapped in traditional burk ha above the designer label like Alexander Mcqueen..Brands like Gucci, Mac  goes hand in hand with the Hijab, Niqab,Ghutra....
The book is a wonderful read and anyone who wants an touch of these culture would find is amazing...

Disclosure
I received a review copy from novel publicity tours..