Summary:
Rich. complex, compassionate story of a contested adoptionand the two women lawyers who join hands to save a small boy's life...

Review:
Georgie Allcheck and Dru Cunningham " the princess and Pauper" duo are attorneys with adoption as their area of expertise... Their work leads them to work closer to pregnant woman, promising possible adoption, prospective couple ,they also represent adoption disputes...Timothy Janus is a two year  boy adopted by Lara and Theo Janus, with the biological father emerging out of blue claiming for his paternal right there starts a tale of battle of legal right, responsibility, love, care , hope and despair....Though initially reluctant to take up the case they do everything to get justice to the child...

Human complexities are unveiled by every layer being dissected in the tale where Anne Strick explores the extremities of humans can subject themselves upon...Depredation of Janus' upon losing their adopted son who has become their soul reason of survival is strikingly portrayed..You can't help but be involved through the tale of loss and hope....Apart from the emotional instincts , the legal, and ethical side of adoption and the nuances involved are depicted in an enlightening way....The plot is powerful though the character slip a wee bit at times , yet Strick revives them into a new horizon adding to them new life for a better reading...The additional plot captured are quite captivating...The characters of that of attorneys and the Janus' family were so well done that at no point the reader can render a string of sympathy for the biological parent...The compassion with which Georgie and Dru fight the case unfolding many other vantage about the adoption and the clairvoyant approach to it only builds the plot very constructively...Many a times ideology takes up  a personal preference that may not go by the regular bench mark, that is truly presented well all through the novel....

The passion for work lead Georgie and Dru to wade and surf beyond the  line...The language is flawless with its elegant portrayal taking special care of each and every angle all through... I loved the way Georgie and Dru came up together to stand up for the Janus all through the twists and turns...They put in every effort  bringing in detail to the argument ... Theirs is a well balanced partnership complementing each other..Their mental agony dealing with emotional moments during  case, their internal struggle to to keep work all away from heart yet somehow getting it all mixed up in the middle are all done well..Even when things went complex with its strange shades, the realist characters questioning the moral side of life very practically makes it a wonderful read..I would recommend this for anyone looking for a serious read with some real stuffs..Being that said the book has a slight smear of romance too, so all in all it would make a good read... 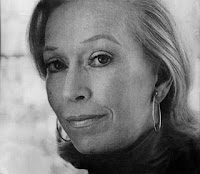 Anne M.Strick has spent over twenty years in the movie industry. She has worked for Universal, Warners, Paramount and EMI, as a Unit Publicist, Project Coordinator and National Publicity Director,  and  with such Hollywood legends as Jack Nicholson, James Earl Jones, Sean Penn, Arnold Schwarzenegger, David Lynch, Sting and Dino De Laurentiis, among many others.  She has published theater reviews, articles in Parents Magazine , Frontier and The Nation, and six books: two novels, two self-help books, one memoir (a best-seller in Italy); and a non-fiction, scholarly critique of our adversary trial system. (”remarkable”) . Born in Philadelphia, and educated at Bennington College and UCLA, she lives in Los Angeles