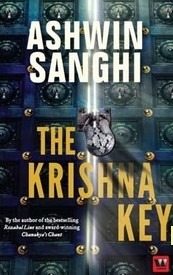 "Lack of evidence does not imply lack of existence. In 1610 there was no evidence of the sun being at the centre of the solar system.. Five years later, the Roman Inquisition tried Galilieo for proposing such a preposterous theory.... Did it mean that the solar system, as we know it today, did not exist?A few hundred  years is all that it takes to accept new evidence." (p-14)....

Ravi Mohan Saini popular Professor of History of Mythology at St. Stephen's College in New Delhi, is arrested on the charge of murder, he is taken aback as murdered Anil Varshney happens to be one of his best friends....Varshney had handed over a seal,just before hw was murdered, this seal was one among the four, together constituting The Krishna's Key..Other keys are with Devendra Chhedi, the genetics expert, Dr. Nikhil Bhojraj , Professor Rajaram Kurkure..Varshney's unfathomable death has made Saini the prime suspect...Saini had promised to guard the seal with his life, escaping police custody he rushes to other three only to find that the hunter is always one step ahead of him making the whole a thriller game...The murder weapon carries Saini's initial is only deepening his whole array of list of trouble. His time is running out of  time, retrieving the seal and key now seems bigger than a Himalayan task..

From the beginning of the novel,you get the feeling of Dan Brown's The Da Vinci Code.. Though it may not be fair to compare both yet you cannot shake off the similarity that they bring in....The readers can enjoy Krishna's key in a different plateau all together...Sanghi has done great research for this novel and that comes across beautifully without putting off the readers from sanskrit jargons...Sanghi has intertwined many known facts and unknown myths to take the novel ahead..Even when I could predict the next turn along the story,the book kept me interested with all the rich Indian myth...For a person foreign to Indian mythology like Mahabharata, and verses of Sanskrit, Sanghi has run a story parallel to give the readers a glimpse of who, what, and where....

I love it when Indian authors go ahead and take such storyline for their novel...The avatar of Krishna in Kaliyug is also painted well..Details of Vedic age and its relevance in modern era is done to perfection...Indian myth with a thriller suspense cocktail was a heady mix for me, yet all along you miss the otherwise awesome writing of Sanghi that you got to read in his earlier book Chanakya Chant....If Sanghi could do something about the loosening of the plots towards the closing of this book , we would have had a super blockbuster...My only problem with the novel was when the whole story that was headed to a higg five suddenly made its turn to Taj Mahal and somehow I felt the author lost the depth from then on....Still I wanted to read on to know what was in store...Though Saini would take on the first place among the favorite characters, both Radhika and Priya went well with me highlighting the brighter and greyer part of life....With all pretension gone the novel ends well...Through Saini, all about different aspects of Indian myth and history comes across well..Saini's love of history is quite contagious as is the dedication of Radhika towards her work...
This book is for anyone who loves historic fiction and Indian myth....

Disclosure
This review is a part of the Indian-bloggers-book-reviews at blogadda.com ...
Posted by vb at 7:32 PM