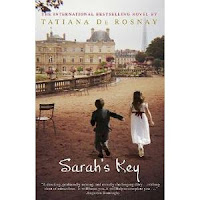 Summary:
On the 60th Anniversary of the French roundup of the jews, journalist Julia Jarmond (American) is assigned to write a piece about the events in 1942 and the upcoming ceremony in 2002...She is jolted by the fact that she has never heard anything about it....Through the connection of her husband's family who are french ,she sets on to learn about Jewish children uncovering her personal connection to one of the child.Setting aside her in law's objection she pursue on her assignment and  to learn about that girl...The journey takes her through a roller coaster ride of emotion that questions her existence and her equation with her husband forever.

Review:
The novel is inspired by the fateful Vel' d' Hiv on July 16 17,1942 which has been the darkest time in the history of France..French police and government officials worked in collaboration with Nazi to control the population of Jews by adapting extreme steps and sending them to concentration camps...Police brutally arrested the families treating them inhumanly , grouped them at Veldrome d' Hiver  before sending them to Auschwitz...It was in my read list for a while, I quickly grabbed it when I happened to lay my eyes at friend's home..She told me that it has been turned into a movie too..

Assigned to do a write up on the 60th Anniversary of French round up, she heads on to the depth of secrets buried deeply  about the Jews who once happily lived during that period , doing this she slowly loosen up knots in  her life too..Though I wanted to love Julia who was strong,honest and determined  but as the novel moved on, somehow  her decisions and her reflections fell flat on me, my crumbling expectation irritated me.. She is a devoted mother but the equation with  her French husband Bertrand is complicated, she is not happy nor ready to face them , she steers onto her career so that she could avoid the problems back home...Rosnay has been able to sustain the mystery around Sarah ,build up curiosity for Michael whom Sarah locks up back on the fateful day thinking she would be back soon...Surviving through all misery, she is still she is unable to get over her over guilt of his brother's fate..The key she hold on as a token for all these years..But at the same time I felt the story fumbled for direction when all mysteries of Sarah is revealed..The book that went high on with its historic part went mediocre went the story came to the present day ...Dealing with guilt is the theme of  book , which is worked on well., the guilt the French carry being part of the ploy against the Jews, their defiance in acknowledging them, families falling apart all are dealt beautifully..Its like  the cross that all seem to carry over the years, burdening them with every single day..Working on her assignment Julia  unravels the secret of Bertnard's family that they have been  quietly hiding for all these years , but then all of a sudden Julia becomes the central theme of the novel, I would have loved it the  way started off.. But I guess that was the whole point Rosnay was trying to emphasis through a different perspective..The holocaust details are engrossing and well written...Families torn apart, children being sent to gas chamber, the agaony the families went through, the arrogant policemen carrying out all these without any mercy upon old and young will leave you in a bad state of mind...
The story moves from Sarah's vantage to that of  Julia's, but like I said before I  loved , when things where from Sarah's point of view while Julia's were great in the beginning but ebbed away towards the end..The book is another good read on  holocaust ..Readers who love historic fiction would definitely love it..