Summary
Twenty eight year Sophie Penhelligan finds herself in a cross road as she finds herself engaged to two men..How will she ever resist  her teenage idol and rock star Dan and what about Tim her boy friend who has finally proposed her...

Review
Sophie Penhelligan has a great life., with her career being a journalist  friends and a boyfriend Tim who has been there for two years, though her relationship with Tim turns her off  time and again., she hopes that someday he will propose her..And then eventually does get engaged but then she gets engaged to the rock star Dan too...The book opens up with a flashback though a slow runner things got a lot better as I hung on to it...Tim is shy, can never really express himself always messes up things and tries hard to make it up to her at times forcing his way , he has a weird obsession with slugs, forgets his rings when he planned to propose  later apoligising .....That is him a cross contrast of Sophie that makes her think something is definitely wrong somewhere...All along the way Sophie has been a great fan having a larger crush for Dan the rock star and a  member of the famous rockband TUSK ..Dan is portrayed as every girl's dream and luckily for Sophie Dan re-entering her life, did I say re-enter?? well she did meet him back in her teenage years at back stage prior to one of his performance., and now she ends up being proposed, she is in cloud nine (obviously) with chorus of angels singing around her but the only trouble is that she is already engaged to Tim.... Kudos to Wells for bringing out the teenage adrenaline rush in Sophie .,when she meets Dan, those crazy moments are real fun to read...But for now she is with Dan too.,in short she is  engaged to both men...Things take quite a roller coaster ride and before she gets a hang on things everything seems to fall apart..There is suspense, thrill, adventure around Sophie, never a dull moment with her.. Edinburg mystery was well done too...Sophie can get on nerves at times driving you to the edge ,in spite of her smartness she can act real stupid., but she is quick enough to reconcile and correct her mistakes but at times the situation itself don't go as she wants  complications upon complications..Sophie keeps pushing her morale benchmark at times getting things right and at times losing it...The ending was a quiet unexpected one and I liked Wells for that..This book is a wonderful for a relaxing read....

“What the hellis going on here?” I hissed, trying to prevent others from hearing our exchange.
“Oh, Sophie, Dan’s turned up. Isn’t it amazing?” she beamed at me.
“I can see that,” I kept hissing, “But what is he doing here?”
Rachel was quite drunk herself and looked at me with those bleary eyes that usually meant she was up to no good. “Sophie,” she declared solemnly and rather loudly, “you have broken the man’s heart. He has come to reclaim you.” She wobbled unsteadily and I gripped her arm. Usually one to hold her liquor, party-girl Rachel had clearly gone too far tonight.
“Shshshshshshshsh!” I admonished. “Will you keep your voice down? What are you talking about?”
“Dan is completely besotted with you, and he said he couldn’t bear the thought of you getting engaged to Tim so he had to…hic…come and check him out…hic!” Oh God, she had the hiccups. She would have to spend the night in the guest room. Once Rachel got the hiccups, she was beyond salvation. I gave her twenty minutes before she collapsed. I had to extract critical information fast.
“Why did you introduce him to Tim?” I continued my interrogation. “Couldn’t you have sent him away?”
“Ooohnoo, Sophie. I couldn’t turn this lovely, heartbroken man away.” She looked at me with big, innocent, and totally unfocused eyes. “In fact, we were just looking for you. You seemed to have… hic… hic… hic…disapp-hic-eared.”
“What did you say to Tim about who Dan was?” I needed to know.
“That he was Dan, of course. Your boy-hic-friend from Tusk!” She dropped this bombshell completely nonchalantly.
“You what?” I squeaked. “Please tell me you’re joking.”
“Noooo, I’m s-hic-erious! Ti-hic-im thought it was very funny. Hic.”
I wrung my hands and barely prevented myself from tearing at my hair. If Tim had thought it was funny, he must have thought Rachel was being facetious or winding him up. He had seen her drunk before (and the experience hadn’t done anything to endear her to him in any way), so it was likely that he hadn’t paid the slightest bit of heed to the truth she was spouting. But I had to move, and fast.
“You,” I said to Rachel, grabbing her by the shoulders and steering her toward the stairs. “You have had enough to drink. You are going to bed.”
“I hic-am?” Rachel asked, surprised.
“Indeed,” I confirmed grimly and marched her up the stairs. “Right, here you are. Guest room.Bed.Now.” I propelled her forward and she flopped on the bed like a rag doll.
“Very ti-hic-hic-red,” she mumbled before passing out.
I, on the other hand, had sobered up dramatically and had only one thought left: damage limitation. I blundered back downstairs, racing quite unladylike in my high heels, and skidded to a halt in the lounge. There they were, companionably sitting in front of the stereo, playing DJ.
I clattered across the floor, grabbing a bottle of champers and three glasses off a table as I went. Tim looked up, and then sprang to his feet.
“And here she is,” he announced to Dan with no small measure of proprietary pride. “Doesn’t she look gorgeous?”
Dan rose to his feet, somewhat unsteadily, and looked me up and down. A sad smile played on his face for just the briefest of moments.
“She looks stunning, indeed. Congratulations to you both.” He walked over to me and planted a chaste kiss on my cheek. “Well done,” he said softly, and Tim beamed gratefully, completely unaware that the comment was aimed solely at me. In fact, he seemed completely besotted by Dan’s manly, famous presence.
“Dan here and I were just discussing rock music,” he informed me as though Dan were his new best friend.
I shuddered for a moment. God forbid.
“Dan has some very interesting views about the movement, you know?”
I winced and smiled a secret apologetic smile at Dan, but he was too drunk to notice anything patronizing in Tim’s comment. I had to separate the two before things got out of hand. Luckily, one of our other guests absolved me of thinking up more ruses by descending on Tim and whisking him away to the kitchen.
Dan and I regarded each other in silence.
“You do look beautiful,” Dan repeated, suddenly sounding a whole lot more sober.
I wanted to cry. “What are you doing here?” I whispered, not trusting my voice.
“I don’t really know,” he acknowledged. “I just felt…lonely. At a loose end. I had to see you and convince myself that…well, that it really is too late. You know?”
I was simultaneously touched and petrified. “I thought we’d agreed…,” I started, but Dan interrupted immediately. 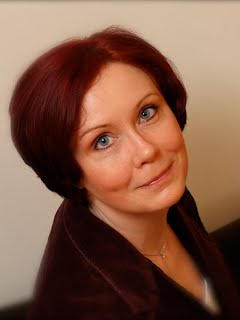 Rock On! Nicky Wells writes fun and glamorous contemporary romance featuring a rock star
and the girl next door. Her debut novel, Sophie’s Turn, is the first part in her Rock Star Romance
Trilogy. Not unlike Sophie, her heroine, Nicky loves rock music, dancing, and eating lobsters.
When she’s not writing, Nicky is a wife, mother, and teaching assistant. Nicky is also a featured
author on the innovative reader/author project, loveahappyending.com.

Originally born in Germany, Nicky moved to the United Kingdom in 1993, and currently lives
in Bristol with her husband and two boys. In a previous professional life, Nicky worked as a
researcher and project manager for an international Human Resources research firm based in
London and Washington, D.C.

Visit Nicky on her blog where you can find articles, interviews, radio interviews and, of course,
an ongoing update on her work in progress, the second and third parts of the Rock Star
Romance Trilogy. You can also follow Nicky on Twitter and find her on Facebook.
Website
Twitter Handle: @WellsNicky
Facebook

*Disclosure of Material Connection: I am a member of Reading Addiction Blog Tours and a copy of this book was provided to me by the author. Although payment may have been received by Reading Addiction Blog Tours, no payment was received by me in exchange for this review. There was no obligation to write a positive review. All opinions expressed are entirely my own and may not necessarily agree with those of the author, publisher, publicist, or readers of this review.