The help by Kathryn Stockett 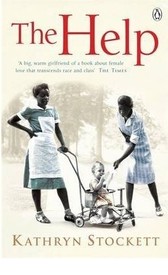 Summary:
Skeeter is turned down by a publishing house.,her ambition of becoming a writer seemed to be dawning as she unravels the stories of black maid in the white household..She becomes close to Ailbeen very giving and caring  and Minny outspoken with classic culinary skills both are black maid working..Skeeter has her won past with a lovely black maid Constantine whom she was quite close too...Skeeter, Minny and Ailbeen the threesome find themselves in a line when such things are still not allowed...Set in the 1960's in Jackson town the novel is about these three characters and their perspective of life...

Review:
This is another book about African American ., but seen through Eugenia Phelan or Skeeter (white)..This novel is not about the larger struggle of earning freedom, but their everyday lives to get on with life..Stockett has chosen an emotional angle, maids who take care of the children they work in...All excited Skeeter returns home from hostel after graduation ., one thing she wanted to get an explanation from her maid Constantine for not writing to her., but sooner to her astonishment finds out that she has left with no trail to find her...Her life starts to move ahead leaving behind her thoughts about Constantine., Her ambition is to become a writer., she soars to cloud nine after receiving a letter from Harper and Roe her happiness are shattered as she learns that she hasn't been hired but they are open to read her work..Gearing up she sends it only to be turned down...She has two girl friends Hilly Holbrook and Elizebeth Leefort., they grew up together living in the same neighbourhood, going to the same school and parties., they are in a similar wavelength...Hilly and Elizebeth are married with children ., now a black maid takes care of them...Though Skeeter was friendly with her black maid Constantine ., her friends Leefolt and Holbrook do not share a similar sentiment ...They prefer to stay outright racist than see truth..Skeeter feels awful after her friends suggests to build a separate bathroom outside their house for black maid..Skeeter gets a subject to write..She decides to talk to as many black maids as possible to learn about their experiences in the white homes..But being white herself., she has a problem getting close to them even the law restricts free mixing of white and black., if seen together blacks could be arrested ., hence she has nothing to go forward., Meanwhile  Elizebeth helps Skeeter by letting her to talk to Ailbeen Elizebeth's black maid .,Skeeter still looks around for other black maids., that is the time when an unfortunate event hit Jackson... A black familiy fall prey to the hands of white men., Coming face to face with such attrocities many maids come forward to share their tale hoping for a better future...We are also introduced to Minnie who comes in as a whizz of fresh air, with amusing moments and her soulful tale...By sheer hardwork and lot of research with many maids she writes the full book and through a contact she gets it published..Skeeter wants to hit of with a wave of celebration as the book turns out to be a bestseller.,except for her town Jackson of course...In spite of claiming about a fictitious town and maintaining anonymity of the maids.,somehow people figure out that it is after all their own town and their maids... Stockett builds an aura of 60's  amazingly., the accent the maid use are a typical of those period..In spite of a serious subject there are moments of fun and humor that will  flint a smile..I loved Stockett for building in strong, bold characters who make their point clear across to the reader and all the three of them be it Skeeter or Aibileen or Minny., they just fit in most ardently...Skeeter is independent with free thoughts and strong ethical value., she doesn't want to live by the flow even if it means to go against the current..Her parents want her to get married and live like a lady like her friends., but somehow Skeeter doesn't have the heart to do all of it just because that is what is expected of her...Ailbileen on the other hand is emotional , kind and a matured lady... Minnie is too loud and outspoken even then she lives with an abusive husband who beats her up every single day...Minnie's cooking skills are so well done that she is hired in a  household even to save marriages...Having three enduring characters and gives the book three different angle rendering the  reader with a perfect panorama....There are many practices that will leave you desperate like the maids are forced to eat their food separately and not anywhere closer to the white., these maids are insulted in front of family and friends., and the irony lies in the fact that these children call these maids mama when their own mothers are busy partying with no time to spend with their children...The extend of prejudice in those times are put in openly with many examples like these punched me ..The book is an enjoyable read., easy to read and difficult to put away...The book goes onto another level as the stories of the  maid unfolds....Through Skeeter we also get the psychology of white's behaviour to the coloured people...I loved the way the novel closes after Ailbileen is fired and she decides to become a writer, strong enough to voice her opinion...At the backdrop of this storyline rise of Martin Luther King Jr's as a strong leader, John F Kennedy's assassination makes news., making the  novel the more alive and real..Had you liked the movie., you would definitely end up loving the book...
Posted by vb at 8:49 PM