Book Review: Letters from a father to his daughter by Jawaharlal Nehru 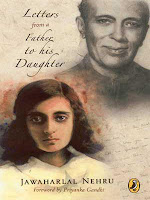 The book is a  collection of 30 letters written by Pandit Jawaharlal Nehru , the first prime minister of India to his 10 year daughter Indira Priyadharshini later Indira Gandhi, who also became the prime minister of the country during a summer in 1928..Though the book might sound out of date for the current era, if you can go back in times, you'll definitely enjoy the book...Nehru's work kept him away from his daughter, it was difficult for him to spend quality time with her, staying away,   letters were the only medium to be close to his daughter and probably the only mean to tell her about  things that a father might tell his daughter during everyday conversation.. I had read an excerpt back in school, I got a copy of ,to gift  my cousin who is about 10 yrs, the same age of Indira Gandhi then..Before giving away ,I read it of course..

These are not mere letters to a daughter, but a way that developed a standing bond between a dad and daughter ...The book opens up with earth and universe..This book give  the reader a glimpse of his personality were he is trying to reach out to his daughter in possible ways...He has a knack of explaining things in a simple way be it the big bang theory, Egyptian mummies or how man evolved to rule over other living being.....He moves on to speak about race, religion , he has interestingly written about the beginning of communication..Everything is so effortlessly conveyed for a 10 yr old to grasp..The essence behind the great Indian mythology Mahabharata and Ramayana is also explained....

The book comprises every edge to make a child ponder on things, it opens up a child  to the wonderful world around....Science, myth, history all finds a place..The illustrations makes the book a wonderful read...The book not only explains various facts, but also leaves room for further studies and thought, and that is the best part of it...
Posted by vb at 10:36 PM