Summary
After a murdered partner, a cheating wife and a lost job in Houston, Nick Sibelius sets up a private investigation business in a small Texas town hoping to find some peace and maybe, himself. When a couple disappears and a bass fisherman turns up dead, he finds himself drawn into a web of toxic relationships:  MaryLou, a beautiful woman with a mysterious past; Junior, a failed farmer whose best intentions seem to always result in a dead body; Barry, a sociopathic dentist turned illegal toxic waste entrepreneur with visions of grandeur.  When the felon who killed his partner in Houston joins forces with Barry, Nick must not only stop the toxic waste dumping while finding his client’s missing daughter, but keep from being killed in the process. In the end, MaryLou’s dark secret will either save him or kill him -- whichever comes first

Review
I started off the book without reading the synopsis...So I imagined the book to be about a kidnapped lovers who would find love and life, but then came a lonely private investigator Nick Sibelius..He sets on investigating the missing couple hired by the girl's father..Things get on an interesting turn with the next character Junior with his weird bad luck of people dying around him., including his who dies in front of him stepping on some farm equipment, he kills a drunken trespassing his property, he even shoots at a hot air balloon flying over his property..Nick discovers the missing couple's motorcycle but does not find a clue about them...Junior is in league with Barry Swenson  an ex-dentist involved in toxic waster dumping  and methamphetamine distribution..This has left Junior paranoid over anyone seen around his property...Junior  further gets in trouble as he threatens one of his school mate to drown to death..To add further twist , Mary beautiful reporter appears..Nick and Mary fall for each other fast, even before he gets grip over things around him,he becomes the target to be killed..Time is running out Nick has to figure out some way to save himself and wrap up the case and to get back a life that he lost, he tries harder fighting all with every ounce of his energy but loses Mary to death...By the end Nick is contemplating his brief time with Mary with gratitude, he believes that she brought him back to life away from his loneliness , that is when he eyes on a parcel that he has received ..A mail and parcel gives him lead thus opening up for the next book in the series..

Hacker has developed the plot neatly, things flow well from chapter to chapter..Nick who has come to Pflugerville, Texas, to find peace and get back to life ,gets an interesting case but then he suddenly is chasing in a power packed race only to discover that from chasing ,his role is shifted to being chased, adding of romance really brought some wonderful moments in the otherwise suspense thriller..Mary is very likable with her determined and face it all attitude carrying a lot of secrets to be unveiled..Those secrets would well go to next  part of the book...The book is highly entertaining with fun and good humor..To get further effect of the novel do read this without going through the synopsis of the book, you would end up enjoying it even better...


Nick’s pulse quickened at the distinctive two part sound of a 12 gauge shell being chambered.  He threw his car in reverse, the big V-8 roaring, tires eating into the dirt track, a cloud of dust enveloping him, as he put the truck between himself and the shotgun. A blast, shattering the passenger side glass, sprayed across his seat, but Nick had already opened his door, rolling out onto the ground. He made his way to the back tire, listening for Junior Pendleton’s position. Junior made it easy.
“Get the hell off my property, goddammit. You got no right to be here.”
Crouching, Nick used the rear of his truck for cover. Junior had walked up to Nick’s pick up,  sticking his head through the shot out window. Nick rushed him from behind, slamming him hard into the truck, the shotgun firing into the ground by Junior’s feet.
Junior screamed, “Sonofabitch. My damn foot. Son-of-a-bitch.”
Nick kept Junior jammed into the window, ripping the gun away from the farmer’s hand. As Junior continued to struggle, cursing, Nick noticed several pellet holes clearly visible in the man’s worn cowboy boots.
“I don’t think that’s how you want to start this conversation, Junior.” 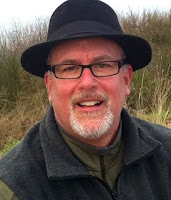 Richard Hacker’s novel, TOXIC RELATIONSHIP, released August, 2012 by Champagne was a 2011 Writer’s League of Texas (WLT) finalist, where in addition, SHAPER EMERGENCE won best novel in the Science Fiction category.  He is a member of both the Writers’ League of Texas and the Pacific Northwest Writers Association.
After living many years in Texas where he worked as a leadership coach, public speaker and management trainer, he moved with his high school sweetheart to Seattle.  While he misses the big skies of Texas, Richard has grown pretty fond of the Pacific Northwest.  Along with his wife, Sidney, they hike, kayak and have adventures on his Vespa scooter.  His writing partner is a springer spaniel named Jazz, who helps with proofreading and ball fetching.
DIRTY WATER, the next novel in the Nick Sibelius series after TOXIC RELATIONSHIP, will be released June, 2013.  He is currently working on the third book in the series, as well as a young adult fantasy entitled INKER WARS: THE FIVE PENS OF JOHANN.

Disclosure
I received a copy of this book to review for the blog tour by Reading addiction blog tour...
Posted by vb at 4:02 PM